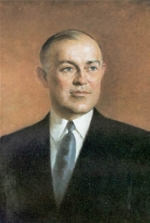 Harry Woodring was born in Elk City in 1887 and because of his father's financial straits he was contributing to the family income by the time he was in the fourth grade. After high school he entered the banking world-at Elk City and then Neodesha. Following World War I army service he returned to banking and a variety of civic activities. He became the American Legion's state commander and that recognition provided him with a base for political candidacy.

Although he was a Democrat in an overwhelmingly Republican state, Woodring managed to defeat his friend and fellow Legionnaire Frank Haucke in 1930 when the colorful and unique Doctor John R. Brinkley disrupted the vote for governor by running as an independent.

Woodring's one term as governor was not marked by any great accomplishments. He was the only Democrat elected to a statehouse office and his efforts to cut back state expenditures were blocked by Republican legislators. The governor reduced his own salary, and the highway department, the one place where the Democrats held control, managed to reduce expenditures. He ran again in 1932 (as did Brinkley) but Alfred M. Landon, the Republican candidate, put the G.O.P. back into the governor's office.

For seven years Harry Woodring was a valued member of President Franklin D. Roosevelt's team. Woodring was Assistant Secretary of War for three years and then Secretary of War from 1936-1940. He left the cabinet after a falling out with the president. Although he never got the headlines that some of his New Deal colleagues did, he played an important role in the federal government as World War II approached.

Woodring returned to Kansas and engaged in many activities-political and non-political-but he never again successfully pursued elected office. He ran strong but lost gubernatorial campaigns in both 1946 and 1956.

Until his death in 1957 he maintained contacts with political friends, both Democrat and Republican. His political career had peaked when he was still in his forties and he remembered those days fondly. Keith McFarland, Woodring's biographer, wrote that Woodring may have written his own most fitting epitaph upon his return to Kansas in 1940 when he said:

"The fact that a Kansas country boy could be elected governor of this great commonwealth of ours, and subsequently serve in the Cabinet of the President, is further evidence that our great democracy does work. ... A Kansas boy has dined with kings and queens, with princes and princesses, ambassadors and foreign diplomats, and has sat at the right hand of the President. But, truly, a Kansas boy has seen Utopia from the mountaintops. But today a Kansas boy returns to heaven."